Lately, I’ve noticed that college students are the WORST when it comes to canceling or being late.

I can’t even begin to count the number of times in college I was stood up by a friend who just randomly decided she wasn’t going to show up without telling me what was going on.

Or how about the times I’d arrive on a settled time only to receive a text from my friend: “Running an hour late, Sorry!”

What kept me sane? As horrible as it sounds, I was secretly calmed by the fact that these same people would be fired in the “real world” if they decided to show up whenever they felt like it. 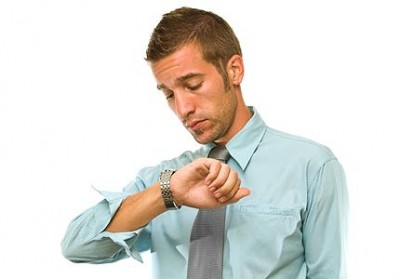 Being punctual is important for one simple reason: By being consistently late or backing out last minute, you’re disrespecting another person’s valuable time and making YOURSELF look bad.

It’s especially insulting and annoying because it’s so easy to make sure you’re on time and/or not keeping the other person waiting! If you’re one of “those” people, check out 5 easy ways to handle any punctuality situation:

This shouldn’t be a shocker. If you know you have to meet someone for dinner/studying/etc, then TRY to be on time.

Do whatever it takes to remember the location/time (e.g., write a note, set an alert on your phone, etc) and then schedule backwards to see what time you’d have to start getting ready and what time you would have to leave in order to make the scheduled meeting.

My personal rule of thumb is: everyone gets a 5-10 minute freebie buffer.

Anything more requires a call/text. And no, calling after you’re 15 minutes late to say you’re going to be an hour late does not count.

3. If you know you’re never on time, give the person a heads up!

It’s really not difficult to tell a person, “Hey, I’m notorious for running late—could you give me a call before you head out. I’ll definitely try to keep you in the loop, but I’d feel horrible if you’re waiting for me.”

It’s not the most perfect thing to do (why should someone else call and make sure you’ve left?), but it’s better than being an hour late.

This also gives the other person the opportunity to prepare for the possibility of you forgetting or not showing up. There is nothing more annoying than clearing your schedule to meet with someone who cancels the last minute or doesn’t show up.

At least if you acknowledge the fact that you are somewhat scatterbrained when it comes to being on time, the person may be able to make a backup plan or call for a ride if you can’t make it.

As obvious as this sounds, some people just don’t get it!

If you’re not going to show up, let someone know. Even if it’s something as casual as you meeting them at their place. Why? Because someone has blocked out other plans in order to accommodate you and you should at the very least be considerate to that fact.

It’s naturally impossible for everyone to be on time, all the time. Things DO come up! But, with the 5 basic rules above, you can make sure no one holds it against you! After all, while you can pull off being unpunctual in college with your friends, it’ll be completely different when you start internships, work and enter the real world.