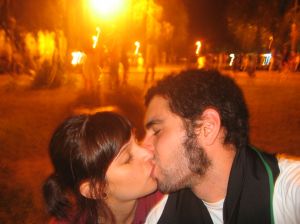 Have you ever been out , you see another person that you know and you just smile?

Both you and he have been attracted to each other for quite some time while in college. And yet, you have not done anything about it yet.  Why?

Well, for one you are attached to another guy and you love each other very much.

But every so often you have that sneaking thought creep into you brain. That’s a very common theme when it comes to college dating.

What if I was with someone else?

Not that you would anything to jeopardize your relationship, but it’s only natural to fantasize about other people.

Even imagine them kissing you.

I was watching this show the other night where this cop’s partner tells her engaged partner that she has wanted to taste his lips.

He basically tells her “You know I’m engaged to someone, right?”

And she in turn says “I don’t see a ring on your finger. So, what could it hurt? I mean, she will never know.”

This goes on for a while and he finally says “One kiss can change everything.”

He tells her he’s not interested in being with anyone else but his fiancé. She backs off for a bit. But what can we learn from this college scenario?

Yes, it’s normal to think about kissing another guy, but is it normal to be so impulsive that you want to act on it? If so, what will that say about your relationship with him or your significant other? What does that say about you? Now some are attracted to the danger, you know doing risky things just to see if they will get caught. But isn’t this a little too risky?

But hasn’t the changing already begun?

If you were so enticed to act out and want to kiss someone else, even if it was just one simple kiss, what does that say about your feelings for your partner? I mean you can rationalize all you want, but there must be something very deep down inside that is telling you that you want to move on. If that is the case, will you do this with another guy that you know, when you have your new partner?

You aren’t just making this choice for yourself, you are making it for him and all the other people involved.

The sad part is that no one looks pass their own desires on this when it comes to college dating.

One kiss most likely will change it all and it may not be a good thing. That one savored kiss that you have been relishing for all this time could be the kiss of death for all involved. What happens when the other people involved get wind of what the two of you did? Not only will you be paying for it with your boyfriend and the other person’s partner, but you will be paying for it all over school.

Yes, college is more grown-up than high school, but not by much. You still have to deal with the voices and the rumors.

What about the friends you made in college, both yours and his? Will you be looked on differently, or will they still treat you the same? With that one forbidden kiss there is so much to think about that I have one question:

Is it worth it?

Who will pay the bigger price in the end: You or the kiss?