How to Land a Job in New York City 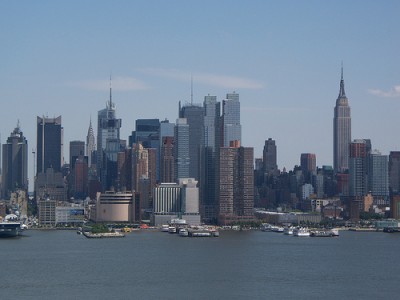 Job hunting in New York City is not for the faint of heart — but it’s also not as intimidating as it sounds, either.

I recently moved to the Big Apple from Michigan, and had mentally prepared for the worst. I’d seen movies like “The Devil Wears Prada” and assumed all offices and bosses would be the exact same way — every man for him (or her) self.

My story has a happy ending, though, because about a month after I started my job search, I landed a great gig doing what I love. But it didn’t just fall into my lap — I had to do my due diligence and put in the man hours so that: A) people knew I was looking, and B) I was qualified for the job. Here are a few tips if you’re considering making a career move in the big city:

Tap into a network here before you move. I knew one person in New York before I moved, so it was up to me to start fostering new relationships in an attempt to expand my reach and make it more likely to land a job. I let my Michigan network know that I’d be moving soon, so they began to put me in touch with their contacts in the city. LinkedIn proved to be an invaluable resource in this process, allowing me to begin a dialogue with these new contacts. Nothing replaces a warm introduction, and soon I found myself chatting with friends of friends, some of whom were in a position to hire, if it was a good fit.

Target companies you’re interested in — and get in front of them. I had a “wish” list of about five companies that I admired and felt I would be successful at. Outside of using LinkedIn to target mutual connections with current employees, I also went out of my way to get some face time with them. This has two benefits: 1) It gave me a chance to make a meaningful impact, instead of simply being a resume in a stack of 50, and 2) It allowed me to see if the culture and the people who worked there were a good fit for my personality.

Sometimes it’s easy to get caught up in the fantasy of working at a particular organization, and you don’t stop to consider whether you’ll actually be happy there. Find out if the companies you’re interested in are holding any meet-ups or job fairs, or simply ask to have coffee with someone who does the job you’re interested in. Most people will be more than willing.

Consider something out of the box. While I didn’t take this particular route in my job hunt, it may become necessary to further distinguish yourself from other job-seekers. The job market is competitive no matter where you go, and New York is no exception. I’ve heard of people wearing sandwich boards in Times Square, or developing a social media campaign directed specifically at a hiring manager. Companies can afford to be choosy, so it’s important to be impactful while also demonstrating the necessary skills to be successful in your desired position. New Yorkers are scrappy and they make their own luck, so it’s best to jump into the fray and try to pave your own way, too.

A few other things that will help you succeed: Get to know the Subway system ahead of time. Use dinners and outings as good excuses to familiarize yourself with how to navigate the uptown, downtown and crosstown trains, so that when the time comes for an informational interview or chat over coffee, you aren’t getting mixed up and showing up late. Hail a cab in a crunch, but know that it’s easy to get caught up in a traffic jam. Also, don’t be intimidated. In my experience, New Yorkers are just as down-to-earth as everyone else (for the most part), so don’t walk into an interview prepared for battle — just be yourself.