Many college students attend school in the Sunshine State for the university of their choice and the warm weather. But this year is a little bit different.

Since the new year has begun, there has been quite a few unusual situations such as snow in 49 states including Hawaii. According to the National Weather Service (NWS), 70.9% of the country is covered in snow this year. 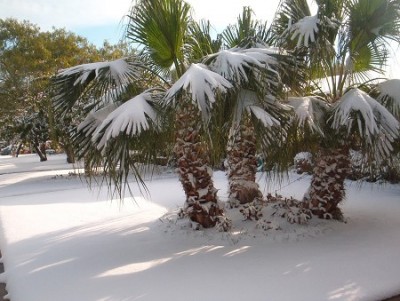 While snow in the North is quite the norm and not much of a surprise, the drastic drop in temperature within Florida is not only shocking, but shivering residents to the core!

Why Is It So Cold In Florida?

In Tallahassee, students have been seen slipping and falling on puddles that have been frozen all over campus.

So what’s causing these cold temperatures?

Some southern states are known for seeing snow, but not the amount that they’ve been seeing these days. In special cases, like recently, moisture from the Gulf of Mexico collided with the cold air hovering over the South which has led to ice and flurries.

According to FoxNews.com, as of January 12, 2011, only 49 of the 50 states had snowfall, excluding Florida, but the winter is not over and who knows what will happen in the remaining winter months.

How To Dress For Florida’s Winter?

The winters in Florida have always been different from Northern winters. But this year, places such as Northern Florida can expect changes not only in the weather, but in their apparel as well.

Okay Florida students, this winter, how about giving those tattered flip-flops a rest. Time to pull out those heavy duty boots, those thigh high boots, Uggs, and anything else that’ll wrap your feet up nice and warm.

Bundle up in bubble coats.

Thin coats aren’t going to do it this year. The thicker, the better. Try buying a coat this year somewhere like Burlington Coat Factory for a quality coat at a low price.

It would be pointless to splurge on a fur or expensive coat for the winter only because who knows how much wear you will get out of it past this season.

Wearing tights or long johns under your clothes are helpful ways to stay warm in the winter this year. Also, rather than buying ankle socks, buy longer and thicker socks made for the winter weather like knee high socks or thick, wool socks.

Stock up on scarves.

There plenty of fabulous scarves out there, but not all of them are made to protect your neck. Cotton scarves are usually the way to go. They are thicker, warmer, and will get the job done.

So this year, how about hanging up the flip-flops and dressing like it’s REALLY winter?