Getting Out Of Abusive Relationships With Help 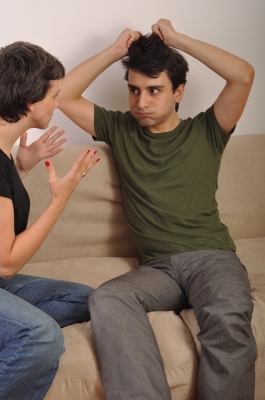 When you are in college you really don’t want to think about the notion that you could be suffering from abuse.

To make matters worse, it could be coming from the person that you love the most. That makes it even more difficult to digest. But what do you do if it’s happening to you?

You may not even see it right away. Sometimes it takes a friend to point it out to you. Now, of course, if  you are like most people in an abusive relationship, you will be dismissive and say things like

“That’s just the way he is. he never means what he says or does.”

Ladies, this is just an excuse and you should not be overlooking it. You may even find yourself telling your friends “BUTT OUT!  MIND YOUR OWN BUSINESS.”

Those are his words, not yours!

I have known too many men and women in this situation and they all say the same thing over and over again. It’s just denial, nothing more. The next time you are out with your boyfriend take a look at what he does. Does he put out little digs in your direction? You need to pay attention because in the beginning this will be very subtle. He may give you some sort of back-handed compliment. You may think that it’s meant to charm you, when in fact it’s there to do the opposite. It’s meant to undermine you.

He may start off slow with these comments, but after awhile the comments will get louder and more clear. After a good period of time he will not sugar-coat anything. He will be down right cruel and mean to you. During a fight, even a small one, does he throw things? I’m not just talking about small objects, though it will start off that way.

I’m speaking about glass items, such as plates and vases. He may even throw them in your direction to intimidate you.

THIS IS A MAJOR RED FLAG.

I know I discussed this in a previous article, but does he control your every move? Does he keep tabs on everything that you do  or say? Does he want to know where you are at all hours and who you are with? Does he begin to get insanely jealous if you are with another guy? This guy could be just a friend, but it won’t matter to him. He will even do this with your friends.

He might even confront your friends and tell them to stay away.

He might even tell your friends to butt out of your business and that he is the only one that can take care of you.

Again, his words, not yours!

Does he speak for the both of you?

Now you may look at this is endearing and sweet, but that is exactly what he wants you to think. Does the sex sometimes feel forced? If you tell him to back off, does he get angry and threatening because of this.

This happens in abusive relationships and this should not be ignored.

This is not a relationship this is a combat zone.

You are pretty much being held hostage by the person that you think loves you. This is not love. He doesn’t want to love you he want to control you. Psychologically speaking, he is making up for some deep-seeded need and affirmation that he never got. He feels the only way to do this is to subject this violence and negativity onto you.

If you feel that you or someone you know is currently in this situation there is help. You don’t have to go through this alone. Because the fear is what he is banking on to keep you close to him. Once you show him that you are unafraid, the tables will turn. You may not feel there is way out, but there is. You just have to be willing to take that step.

I hope you’ve learned a little about abusive relationships. I’m no expert, but there’s help out there for you.

Photo by Freedigitalphotos.net  | By Ambro