Respect Yourself: How To Avoid Being a Drunken, Hot Mess

We’ve all seen that guy or girl at the party who has had too much to drink and needs to go home.

This person, who is on the verge of vomiting until the sun rises, is not who you want to be.  No matter how much fun he/she seemed to be having at the beginning of the night before the alcohol took its toll, it’s not worth the embarrassment that comes later.

1. Keep Count of Your Drinks

Do what works for you. If you want to keep track with your phone, by writing it in your hand, or keeping a sober friend close by, you need to keep track of how much you’re drinking.

Time flies when we’re having fun, and two drinks can just as easily turn into seven or eight if you’re not careful.

Alcohol tolerance is a tricky concept and it’s not something that is going to change overnight. If you know you can’t pound four shots of tequila in an hour without hurling, then why push yourself?

We all have different tolerances for alcohol and just because someone else may have a higher tolerance does not mean you should try to keep up with them.

Who cares if that guy/girl across the beer pong table who’s half your size can drink you under the table? There’s no point to try to change the facts. If you or a friend may have a problem, seek out more information around the web.

If you plan on getting absolutely hammered, don’t skip dinner. Your stomach instinctively craves food, not alcohol, and eating beforehand will keep you from getting a lot sicker later.

If you start to feel like you’re getting more intoxicated than you would like, there’s absolutely nothing wrong with taking a break to grab a snack or chug some water.

If you really want to avoid that hangover, try taking some vitamins before heading out—that way, your body will be ahead of the game when it attempts to break down the alcohol in your system.

Your friends will thank you later. 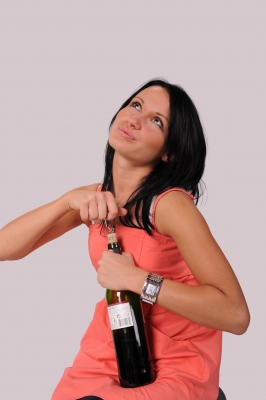 Do you recall the guy/gal who was a hot mess that I mentioned earlier? I bet you do. We’ve all either seen someone who is that intoxicated or have been there ourselves.

Think before you decide to black out if that’s the way you want to behave in public and if that is how you want to be known at parties.

Do you really want to be the one who is carried out of the house or passed out on the sofa? Odds are, you don’t.

Remember that just one night of drunk fun could ruin your reputation and make you hate the world because of your hangover so drink responsibly and you will have a lot less to worry about!