Once again it’s the end of the week and you don’t have to wait anymore (stands up and claps)!

It’s time for more dorm stories. Grab a drink, put on some comfortable clothes and get ready to laugh it up at another’s expense. Start your weekend off right with some humor to put you in the right mood!

The first story reminds of us a concept we all know to be true: as college students, we all run the risk of being placed with a crazy person as a roommate. Sometimes they’re a neat freak, other times they’re a wild party-animal and sometimes they’re just plain evil…

Story #1: The Roommate from Hell

“One year, I lived in the apartment dorms on campus; it was a 4 bedroom, 2 bath, but only 3 of us lived there.

While one of my roommates was a good friend, the other girl who lived with us, let’s call her”X,” was a random, but she was cool and my friend and I both liked her. Two months after we began living with her, we found out that she wasn’t really supposed to be our roommate; the original girl who was meant to live with us was living with her boyfriend, which we thought was pretty strange.

Apparently, the girl who was supposed to be living with us and her boyfriend were put off by “X’s” craziness so they kicked “X” out (who was supposedly the girl’s best friend) and “X” moved in with us.

This woman was crazy to say the least. She was unbelievably messy and when we asked her to clean up some of her things, she flipped out. She started screaming and yelling at us, throwing things and threatening to fight us.

We ended up doing deceitful stuff to her like putting salt all over the food she left out and hiding clothes she left around the house so she couldn’t find them.

If she ever noticed, we never heard about it. At the end of the semester she ended up moving out and we got another roommate…. come to think of it, we didn’t get along with her either…” 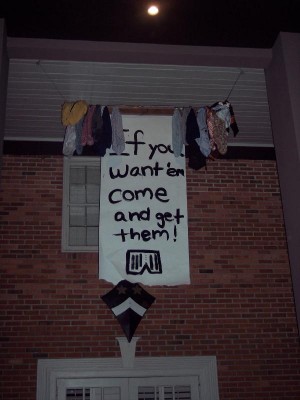 Be careful of the pranks you play in college because you never know who may be getting their underwear stolen!

“I lived in one of the male dorms and around that time, things were still pretty lenient with girls coming over and into our rooms.

We used to keep our doors open when we were playing video games or just in the rooms hanging out. There were girls that lived on the floor above us and they used to always play pranks on us.

We had heard that they were going to do a boxer raid on us so we filled up buckets of water and waited for them to come by. After a long time of waiting and no action, we got bored and started playing video games again.

A few hours later the girls barged in and went straight for our underwear. We tried to grab the girls, but they were pretty fast; they grabbed most of my roommates boxers and I grabbed the buckets and splashed water on them.

They were pretty upset and started complaining about their hair and other things. What was supposed to be a joke turned into a fight for our underwear.

A week later we got some of their panties when they left the door open in their room when they were away and we hung them on the bulletin board in the dorm lobby.”