Everyone knows the basics of dating–dress up, smile and put out the best version of yourself to keep your date interested. But a new study published by Evolutionary Psychology can give your priceless advice on how tilting your head can make you seem more attractive.

“The way we angle our faces affects our attractiveness to the opposite sex.” 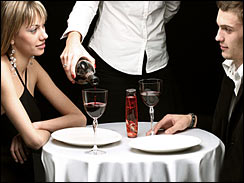 “For women, a slight downward tilt of the head simulates the view from above and that is most feminine and most attractive,” says Burke.

“For men, a slight backward tilt of the head is judged at most masculine, which can make the man more attractive.”

Burke further disclosed the perfect example of the head tilt was in the late Princess Diana whose always had a “demure, slightly down-tilted angle of her face.”

The psychology behind these revelations is that evolutionarily speaking, men are taller than women and therefore, men typically view women’s faces from slightly above and women typically view men’s faces from slightly below. When women and men tilt their heads down and up, respectively, they mimic each other and subconsciously find each other attractive.

So whether you’re trying to lure someone via Facebook profile picture or making a good impression on a first date–make sure to get your head tilt right!