Skip to content
Everything HOT Topics Life in College News

The College World Series is Back!

The Men’s College World Series is one of the most exciting times of the year in college athletics. 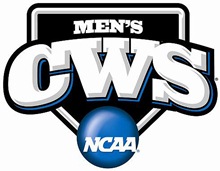 While the College World Series doesn’t get nearly as much attention as March Madness or the BCS National Championship Game, it’s a great chance for baseball fans to watch some talented teams battle it out for the national title.

The 67th year of the tournament kicks off on Saturday in Omaha, Neb.,  with Oregon State vs. Mississippi State at 3 p.m. ET.

Match-ups for the week include:

The teams you’ll see playing this weekend competed in regional and super regional tournaments held across the nation to get to Omaha. The eight teams competing in the College World Series were narrowed down from a field of 64.

The CWS is set up as a double-elimination tournament, meaning teams have to lose twice to be completely out of the running for the championship game. The two teams left standing will face off in a best-of-three series, which kicks off June 24. Click here to see the full bracket and game times.

Why you should watch

What’s great about the format is that you can see a team lose big on their first outing in the CWS, but they still have the opportunity to bounce back and fight to move on to the next round as long as they keep winning. It is truly inspirational to see the players carry on throughout the week, even though you know they’re mentally and physically exhausted. You will also get to see some great story lines develop as you get to know the teams better throughout the week.

If you love to watch baseball, you’ll love to watch the tournament unfold. You can tell these young men are in this for the love of the game AND for the love of their universities, which is refreshing to watch. Since many of them are heading off to the MLB soon, you’ll also get a preview of the talent that could be coming to your favorite professional team.

If your school is in the hunt for the title, make sure to tune in and cheer them on! Even better, consider hosting a viewing party for your college friends so you can root on your alma mater together.

Even if you don’t have a horse in this race, it’s still fun to take in all of the championship action. My own team of choice, the South Carolina Gamecocks, got eliminated by North Carolina, but I’m still going to be watching every minute of it (even if it stings a little bit).

Want to know more? Check out these facts from NCAA.com: