Different Ways You Can Participate in Class

Once you get to college, participation becomes a major percentage of your grade in most, if not all of your classes.  Unlike high school, you don’t have everything spelled out for you in college and you have to take responsibility for yourself and your own learning.  Participation is a huge part of that because it allows you to become more engaged in what you’re learning and discussing, and most professors value student input.  In one of my English classes during undergrad, the professor told us that she revised a few things in the book she was currently working on due to the ideas we discussed in class one day that she never thought of before.  More often than not, teaching and learning truly becomes a reciprocal process in college.  But with this pressure to participate in class, what happens if you’re more shy and don’t feel comfortable doing it?

What does it mean when you participate in class too much? 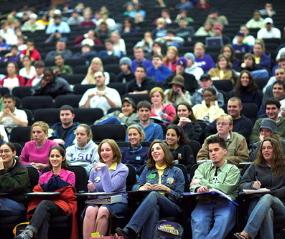 Participating without being vocal

Participation doesn’t necessarily just mean being vocal in class during discussion or by answering professor’s questions, which is a good thing for those who are more introverted.  I fall into this category and during class I’d rarely ever speak.  I’m very much a sit in the back, observe, and take extensive notes kind of a student.  If I ever did say something by choice, my heart would start beating really fast and it would feel like I was having menopausal hot flashes.  I became nervous like this, because I knew I had something I wanted to say and it was so out of character for me.  If you’re like this, I’ve learned that there’s nothing wrong with that.  Talking in class can be intimidating, especially if it’s a big class, if the professor is intense, or if there are other students in the class who are extremely opinionated and talk all the time.  Nothing is personally wrong with those who fall in the latter category either, but from hints received from professors over my years in college, you should be mindful about your “talking.”

Be respectful and aware of time spent talking

Most professors and students don’t like when 1 or 2 people are the only ones who answer questions or give their opinions on whatever is being discussed in class.  It’s frustrating for other students who want to offer some input, and it’s frustrating for professors who want to hear the voices of all their students.  In one of my classes, a professor told us an anecdote of a student such as this and he said he went up to that student after class and said, “We need to talk about your ‘talking.’”

Sometimes if you’re in a class with students like that, after a while, the professor won’t call on them when they raise their hand.  Professors are more aware than you may realize.  Furthermore, professors and other students don’t enjoy it when another student says something random or borderline pointless, just for the sake of participating in hopes of racking up percentage points for that portion of their grade.  You know the type: they seem to be speaking for 10 minutes and they actually don’t really say anything.  Try to avoid doing that because it’s not beneficial to the class or discussion.  If you’re going to speak, be thoughtful about it, and make it count.

Your participation grade is usually comprised of many factors besides actually talking in class.  Professors take into account your attendance and your behavior within the class.  They understand that students are different and that some are more comfortable being vocal than others.  It looks just as good to a professor if you’re actually present in class, meaning you’re actively engaged in the discussion by paying attention, taking notes, or if you’re trying to contribute if you’re broken up into smaller groups to perform a task.  Simply take an active role in your own learning process and if you’re going to participate, again, make it count.

Shay Morazes has her Bachelors in English from The College of William and Mary and will soon pursue a Graduate degree for Secondary Education. She is a health and fitness enthusiast who wants to help others live happy and active lifestyles.