Sports and competition are human nature.

People have been competing since the beginning of time. From Gladiators and wars being determined by lacrosse games, to baseball, new sports continually arise to carry on mankind’s tradition of competing.

Recently, a sport unlike anything ever seen before was created by Jeremiah Schwarz, while attending the Savannah College of Art& Design. The sport is called TRI, and premiered April 6, 2009 at the Jio Tong University field in Shanghai. 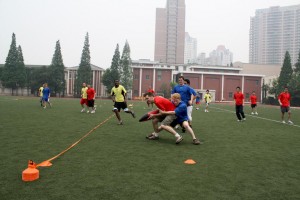 TRI involves three teams playing on a circular field with a 55 yard diameter, segmented into three wedges, with a circle in the middle called the hot zone.

Should a player accidentally enter the hot zone, they must sit out for the next play.

There are five active players per team and the game lasts for three half-hour periods.

The game starts off with a race from the edge of the hot zone to determine possession of the ball, which is similar to a stretched out football. Players must attempt to get the ball into the goals, located out of bounds behind each team’s area.

Should the ball go out of bounds, the team that was responsible must kick the ball in. The ball is passed strategically en route to another player, but the player can be tackled at any time. Upon being tackled, the ball is awarded to the tackling team.

The game is fun, new, unique, and exciting.

The three team concept is very different from most modern sports, and TRI looks to be a cool, fresh new take on games.

Pranoy is currently a freshman studying Pre-Medicine at the Pennsylvania State University. Pranoy spent most of highschool in pursuit of excitement, doing things like building giant waterslides down hills and having nerf gun wars in the woods. He is an avid fisherman and outdoorsman, and has been fishing for the last thirteen years, including three years of competition. In sixth grade, Pranoy found a knack for hip-hop music and began rapping. His favorite artists are Tupac Shakur, Immortal Technique, Jay-Z, and Big L. He also likes to experiement with different hobbies from carving and airbrushing to card throwing and archery. As a freshman, Pranoy pledged the International Fraternity of Phi Gamma Delta, commonly known as Fiji. Pranoy offers insight on the beginning of college life, and the transition from highschool.