There was once a time where movies made sense. Everything took place in the world as we knew it and nothing was unclear. However, with the dawn of The Matrix films, moviedom has transformed into something that neither the characters nor the audience are sure of; take the recent success of films like Shutter Island and Inception. Audiences want to see flicks that don’t lay everything out on the table and have an air of mystery about them.

If this is what you’re looking for, you should see Sucker Punch. 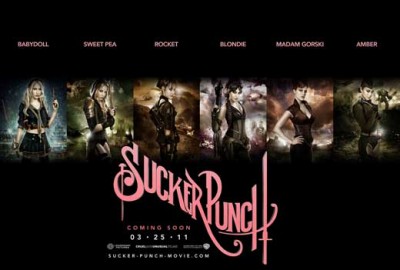 Now, right off the bat: the movie is not the best film ever (was someone ever expecting it to be the best film ever?) The plot is sparse, the numerous slow-motion sequences can get a little annoying, and character development is a concern that is overridden by its protagonist’s ability to look hot in a two-piece schoolgirl/sailor combo. Despite all this, there are two notable things about the movie. First, the music is wonderfully juxtaposed with the action so I encourage all of you to (legally) download the soundtrack if you’re in a musical rut. Secondly, the movie will work your mind. It won’t make your brain go full-out, WHAT IS THIS à la Inception, but it will make you think. So sure, the movie is mega-violent and either seems like a never-ending music video or video game (you can choose), but Zack Snyder has once again managed to mix action, music, and emotion in his distinctly polarizing style.

Final verdict: If you’re bored sometime this weekend, grab a friend and see it. It’s not the best film in the world, but its music and aftershock prevent it from becoming the worst.