Body Bluffing: Why Do Men Lie About Their Height?

I realized pretty early on in life that guys lie about their height.

And I’m not just talking about short guys, either; ALL guys, short or tall, lie about their height. I can understand when 5 foot guys put on 2 inch man-heels and say they’re 5’4—but why do 6 foot tall men say they’re 6’2 and 5’10 guys say they’re 6 feet tall?

What’s in a height? What is it about the length of a man’s body that makes him feel like more (or less) of a man?

Should guys be lying about their height?

Ethically, guys should NOT lie about their height. But consider this: Taller guys (up to 6 feet 5 inches) have more sex.

This raises the question for women, if height shouldn’t matter and guys should tell the truth, then why are taller guys, or guys perceived to be taller, getting laid more? 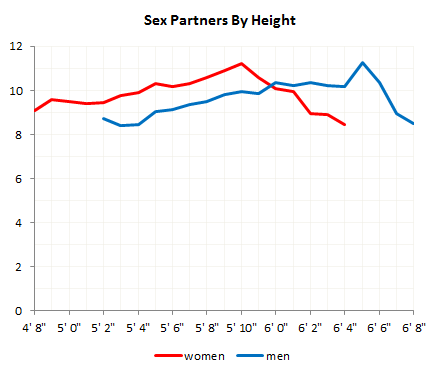 How many inches do guys add to their height?

I always thought guys added two inches on average to their overall height—it’s enough to make a difference but not enough to be noticeable and according to OKTrends.com, two inches is what guys are bluffing about.

How are these bluffs being called out?

If men were telling the truth, the graphs should be similar (regardless of sample size). Their findings? Their members had the same bell curve, but were off by 2 inches! These results suggest the men were in fact lying about their height.

Why do women want taller men?

Many people believe women are evolutionarily predisposed to preferring taller men because it makes them feel more secure, taken care of and protected.

Psychological studies have found that taller men seem more masculine and assertive (Melamed, 1992) which are qualities that many women look for.

Some women prefer taller men due to their own height and the traditional norm (which is currently changing) that the man should be taller. Others fall for the media speculations of what an attractive man should look like: tall and masculine.

At the end of the day, as with any superficial standard, height does not matter. Yes, when women day dream about their ideal man they may imagine a 6 foot male, but personality and chemistry trumps height and appearances for many women. And if it doesn’t, then you’re with the wrong girl!

Long story short, a confident guy shouldn’t waste his time adding inches to his height. That being said, if he does, you can’t blame him! Women DO want taller guys.