After the recession of 2008, the overall unemployment rate in the U.S. hovered near 10 percent.  Today, the unemployment rate has dropped back to a more “normal” 8 percent, but many people who lost their jobs six years ago are still struggling. One of the primary reasons? They simply don’t have enough education.

A Bachelor’s Degree Is the New Diploma 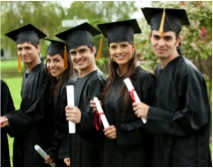 That’s no longer the case. According to The New York Times, the bachelor’s degree has become the new high school diploma. Today, unless you go to college and earn a degree, you’re going to have a hard time getting any job. The proof is in the unemployment numbers: for those who hold a college degree, the unemployment rate hovers around 3 percent, while it is a little over 8 percent for those with no more than a high school education. A Georgetown University study found in the five year period between 2007 and 2012, people with only a high school diploma lost 5.8 million jobs, while those with college degrees saw no measurable job loss.

The Georgetown study also reached some surprising conclusions regarding lifetime earning power and educational level. In the early 1970s, the vast majority of the middle class (more than 60 percent) was comprised of those who had nothing more than a high school diploma Today that number is only 45 percent, and falling. What is rising is the number of people living near or below the poverty level in the U.S. who do not have a college degree: as of 2007, 35 percent of the lowest-income Americans have only a high school education.

It’s no surprise more education equals greater earning power. A worker with a college degree has the potential to earn almost twice as much money over their lifetime as a high school graduate ($3.3 million as opposed to $1.7 million) with the earnings climbing to $4.4 million over the course of their career if they earn a doctoral degree. Given that fact, experts predict that in the future, the only jobs available to those without college degrees will be low-paying, unskilled jobs such as food service, office support, manufacturing and manual labor. It only makes sense that the salary gap will continue to widen.

Some have questioned why employers are placing more emphasis on college degrees these days, given that many of the jobs were filled by high school grads in the past. There are several reasons for this phenomenon.

First, competition. Even though the job market has opened up in recent years, competition is still fierce in many markets. Requiring college degrees gives employers an objective measurement by which they can assess candidates while also limiting the number of unqualified applicants.

Finally, as many industries become more technical and move at a faster pace, employers are expecting employees to come in with at least basic knowledge so they can hit the ground running instead of spending weeks or months learning the ropes. Even when someone takes a job outside of their major field of study, they generally have the critical thinking, problem-solving and communication skills necessary for success in any field. This makes them more appealing to an employer than someone who has not received that type of training.

The bottom line is that anyone searching for a job these days is more likely to find a college degree listed as one of the requirements. While a bachelor’s degree is not necessarily a golden ticket to your dream career, it is definitely an important and necessary step, toward success and financial security.

About the Author: Laura Hensley is a former recruiter who now writes on topics concerning human resources and employment trends.