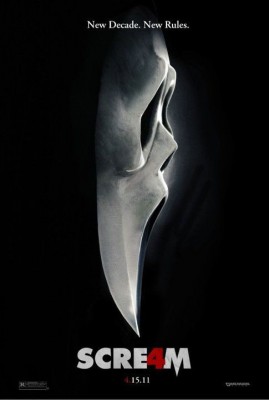 If you want to be scared, don’t see Scream 4.

The movie, even to those not familiar with Wes Craven’s legacy, isn’t frightening in the least. In the film, Sydney Prescott returns to her town of Woodsboro, CT only to find herself once again fighting to stay alive before a new Ghostface does her in. Neve Campbell returns to the role of Sydney; David Arquette and Courtney Cox also reprise the roles they originated in the original Scream trilogy. However, there is a decided focus on the younger, fresher cast members including Emma Roberts, Hayden Panettiere, and Rory Culkin. There are almost no surprises as to who gets killed, though the ending might throw you a for a loop (that didn’t happen for me, but that was because I went to a midnight showing where the last four rows of the theater loudly speculated on what was going to happen throughout the majority of the film. Isn’t that always the case with horror movies, though?)

What I didn’t expect from the movie at all was the concept of metatheatricality, which was expounded on from the very beginning. In the parallel universe where Scream 4 is set, there are a very prominent series of films called Stab, which, according to the characters, were very gory but spawned a number of bad sequels. Adam Brody, who plays a police officer, makes a point to discuss how unfortunate the plight of police officers in movies is and is stabbed about eight minutes later. Finally, Cox and Arquette make a point to cite how “meta” something it in a phone conversation, which provided the perfect opportunity for me to scream, “DOUBLE META!” in my head.

Final verdict: If you’re not into blood or hot girls getting offed, don’t see Scream 4. If you are looking for a sometimes-thrilling flick that knows when to poke fun at itself, go see Scream 4 at your local theater today.