Modern Day Music & Movies: Is Everything In Media Just a Remix?

“Everything is a Remix”

Having been sick for a while, the only thing to get me back to good health (mentally at least) was to watch Kill Bill, Volumes 1 and 2. Those movies are a masterpiece to me. Once Quentin Tarantino released the movie, I thought, “whoa, instant classic”.

This all became super coincidental after someone on Facebook posted a link to “Everything is a Remix” , a 4 part series by Kirby Ferguson and Robert Grigsby Wilson, right after restoring myself to sanity. Down the rabbit hole we go…

After watching the first and second installments (“Music” & “Movies” respectively) I got concerned. While this is a very important and super relevant topic of the past 30 years, there seems to be a general blanket on the use of the term, “remix”.

Here, it seems to be implying that as a human race we are losing our originality and how media constantly has to borrow the past to make “new” material. Let me first explain that I believe a lot of things lately have become more and more evident of sampling, mash-ups and remaking, but it’s important to differentiate between the use of “remixing” instead of implying it as a general blanket term.

“Remix” original applies to the music concept of taking a song, adding to it or spicing it up with instrumentation changes, or lyrical additions. Sampling is the technique of taking older music and incorporating it into a new thought (J. Dilla samples The Jackson 5). Both different concepts being incorporated and twisted into a blanket term. To me, it doesn’t work.

When I look at all the media that samples from the past, there are two ways of doing it: the first, and more morally correct of the two, is homage; or “paying respect to”. This is extremely crucial when looking at the second video presented by Ferguson and Wilson because they try to use George Lucas/Stephen Spielberg and Quentin Tarantino as examples of “remixing” with “Star Wars” and “Kill Bill” respectively.

It is important to know that from these particular movies, they are indeed HOMAGES to the past. The directors themselves admit this, and to the certain examples Part 2 address (and the extended featuring strictly Kill Bill), and explain how they were influenced as a child by these great classics to add them to their own story line.

For the extended clip provided on Kill Bill alone, it stretches “proof” of “remixing” by even including trademark styles that Quentin Tarantino uses. For instance, his “visual from the trunk” camera angle is used consistently by him. It’s his trademark. Also, the example of Uma Thurman in Pulp Fiction saying “square” and how it is used in Kill Bill is a joke/homage to the work Tarantino and Thurman did while IN Pulp Fiction where they created the basis of the storyline to be used in Kill Bill.

With other movies discussed coming from musicals etc. is the reason why the term “adaptation” is applied. Although, the past decade it has been hidden from the title/credits and more implied on director/writer/producer “dvd commentary” and/or wikipedia notes (ha!). I do however like the discussion of genres and it seems to be the best way to create “original” movies, but they are commercially difficult to be produced and watched. 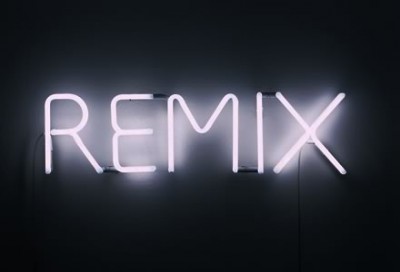 Music is a harder concept to discuss. I think more of the points used here were more valid than the movies but the examples he used were very weak.

I’m beyond shocked that the issue of Vanilla Ice sampling/”remixing”  Freddie Mercury and David Bowie’s “Under Pressure” wasn’t used. I guess that was the creators way of not remixing, I mean sampling, news material everyone knows about from the 90s.

The Led Zepplin issue brought up tracks I wasn’t aware of, but at the same time understanding Jimmy Page better (see “It Might Get Loud” documentary) he clearly used the same chord progressions and melodic structure (contour changes sometimes), but intends it for paying homage to the classics.

In the documentary “It Might Get Loud” and from personal education studies in music, rock is a direct descendant of blues and jazz (someone also commented on this as well on the website). Ragtime/blues/jazz and older music often use similar chord progressions (reason why Daft Punk can be used as an example but is a stretch due to the alteration of rhythm) and the “walking bassline” is a technique originated way back with figured basslines to adhere to the strict musical rules created by the advent of chant music (ie; Hildegard Von Bingen), counterpoint, and the “Treatise On Harmony” by Jean-Philippe Rameau (a chore in itself to explain all those nasty rules).

Well then, what examples should be used instead?

It is important to understand that music is a different animal than movies. Music nowadays involves a career with an individual (can span many years!), the record companies and industry use this to create the “industry machine” which has become evident with the likes of Lady Gaga.

The reason why I will never like Lady Gaga is because her Haus of Gaga use their PR’s to correct errors of sampling without intention of giving credit. To be fair, I liked her in her NYU days before she discovered drugs. For instance, her style is taken from Grace Jones, as well as Bjork (Alexander McQueen was her best friend, sang at his memorial, created a song/video tribute, also originated “egg” idea in 2001 Academy awards), and now the haircut of Die Antword’s Yolandi Visser (alone, comparison).

Granted, she IS a genius for combining all the previous success factors to create something new that is extremely successful. It is THE most successful MARKETING BRAND the music industry has ever seen.

“Born This Way” can easily be confused with “Express Yourself” not only with its music, but even in it’s lyrical theme. The Haus Of Gaga is genius, but in the same regard, she didn’t win Album Of The Year for a reason; her music is in no way shape or form pushing the boundaries of music forward unlike her fashion/opinions.

This form of sampling I consider the darker, “bad” side of “remixing” in the light I believe the directors mean to express. I also think a good example for music is Dr. Luke and how lazy he got producing the identifiable resemblance between Katy Perry and Ke$ha in 2010 (Scary isn’t it?).