It’s Thursday again, the day you’ve been waiting for; it’s time dorm stories! Last week you read about panty raids and sweet serenades. The stories this week are just as funny, if not funnier. Hope you enjoy!

Story 1: Who Burnt the Popcorn?

This story is coming from one of our fellow contributing writers, Mitchelle Ray and her experiences with kitchen mishaps. Every college student knows this rule: if you burn something, prepare to get burned by everyone in the dorm!

“I had just gotten back from Chili’s and had leftovers that I was going to save for later. About an hour after getting back to the dorms, I remembered my leftovers and started to get hungry again. My mouth salivated to think about the pasta and garlic bread left over from the restaurant so I headed into the community kitchen to give into my cravings.

I popped the garlic bread in the microwave and let it whirl. The microwave was the kind that had a dial on it rather than numbers so it was somewhat out of date. Once the bread was cooking, I stepped out for a minute to use the bathroom.

I realized too late that I had turned the dial too far to the right because when I opened the microwave, a gust of black smoke came rushing out. I opened the windows and saw the smoke detector on the other side of the room.

I rushed over to it and tried to fan the smell away with a towel. I was afraid that the fire alarm would go off and I didn’t want anyone to get mad at me for waking them up; it was already 10 o’clock at night.

When I finally got rid of the smoke, I could hear girls outside my door getting mad because the smell had crawled all the way down the hall and around the corner: 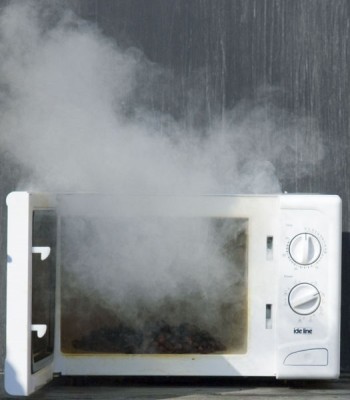 Annoyed Resident #2: “OMG! What is that smell?”

Annoyed Resident #3: “Ugh! Who’s the idiot that decided to funk up the entire hall?”

I didn’t want anyone to get suspicious so I stepped outside the room and agreed with them, “Yeah, I wonder who’s the idiot that decided to burn popcorn?”

Looking back on it, how did they not know it was me? The panic-stricken look on my face was enough to give me away to even the most gullible person.

Needless to say, I never heated up bread or anything else in that microwave for a very long time.”

This is from one of my friends up North; his life should be a stand up comedy hour. What happens when you mix a group of drunk, bored college guys and the women’s dorm? Naked shenanigans, of course!

“It was a Saturday night and my friends and I were bored sitting around the dorm with nothing to do. We had a couple of drinks and were just sitting around when we finally decided we had to do something fun.

The girls dorm was a good distance away so my friends and I thought that if we walked over, we may be able to get some kind of entertainment.

We were all pretty plastered and rowdy so we were making a lot of noise on the way over and when we entered the dorms. We were knocking on doors and when the girls came out we would ask them for stupid stuff like condoms or Juicy Juice. Some of them got mad, others laughed and talked to us for a bit.

Eventually, we got bored so one of my friends suggesting streaking down the hall and knocking on all the doors so the girls would poke their heads out and freak.

Looking back on this, the alcohol made this idea seem like a good idea, but it was anything but.

Only three of us ran down the hall naked while the other two fully clothed guys knocked on all the doors (I was one of the naked guys). As the guys knocked, the girls emerged and saw us running down the halls naked; some of them freaked out, others thought it was hilarious.

I have no idea what happened, but at some point, I made a wrong turn down the hall and lost my friends; I couldn’t even hear them anymore. When I found my way back to the floor where I took my clothes off, I couldn’t find them.

It was then I came to a realization: I was standing in the middle of the girls dorm, stark NAKED.

What made it worse was that there were still some girls outside their rooms watching me; The girls who were angry started chasing me and throwing things.

Luckily, I made it back to my room just in time to curse out so-called friends for leaving me and taking my clothes.

To make matters worse, I was referred to as “that naked guy” for quite some time after that.