Guess what? Can you guess? You’re right! Its that time of the week again. The time of the week where you get to hear about the crazy, embarrassing and hilarious stories of college students in their dorms.

This first story reminds us that getting a roommate in college can be a crapshoot; you never know who you will end up with or whether or not they will keep their clothes on!

“My freshman year my roommate was a little weird. She had a boyfriend that she talked to on her webcam all the time and when she wasn’t watching anime, she was reading weird book about witchcraft.

We never spoke much because she creeped me out and whenever I had my friends come to the room, she would ask them weird questions like ‘Did you hear about the UFO spotting?’ Needless to say, my friends never really wanted to come to my room.

Since she freaked me out a bit and I didn’t really like staying in the dorms, I slept at a friend’s house who lived off-campus most of the time. One night I went to a party with some friends and came back to the room kinda of late.

I guess my roommate figured that I wouldn’t be home because when I walked in, she was sitting in front of her computer naked, on web cam with her boyfriend who was also naked.

I gasped really loud and closed the door. I never knew if she heard me or not, but I left and didn’t come back until the next morning when she wasn’t there. After that little incident I switched roommates…. I couldn’t face her again and have that image keep replaying in my head.”

This next story reminds us that girls can sometimes be caddy in college and bullying is not always left in high school where immaturity should stay. Find out what happens when one girl had enough garbage from her neighbors!

“Let me start off by saying that I’ve NEVER gotten along with females. As cliche as it sounds, they’ve never liked me.

My sophomore year of college I lived next door to 3 girls who just couldn’t stand me for whatever reason. I pretty much ignored them for the most part, but they made it known that they didn’t care for me very much.

For example, I had class with one of the girls and every time I answered a question she would rebuttal my answer or try to prove me wrong. The other two really didn’t do anything, but make rude faces and sly remarks at me.

They didn’t really bother me until one day I walked out of my dorm and there was a huge pile of trash in front of it. I knew that they had done it because no one else would have it out for me like that so I devised a plan.

I got a few of my roommates and friends together to help me collect trash from other people in our dorm. We walked around knocking on doors asking to help people take out their garbage. When we were done we had about maybe 20-30 huge trash bags full of garbage (yes, it stunk but I wanted revenge).

We all piled the trash high so that it would cover the entire door so they wouldn’t be able to get out. I would love to tell you what happened when they tried to open the door, but I never got to experience it.

A while after that incident they all moved into an apartment off-campus. I usually never see them on campus but when I do, a little part of me chuckles.” 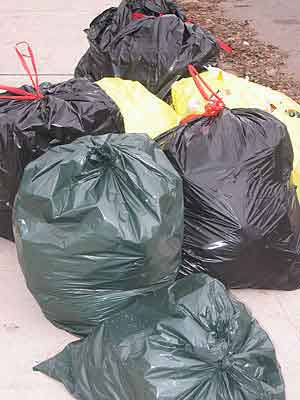